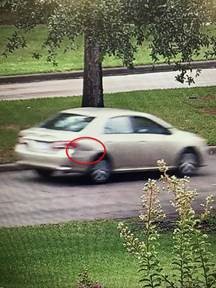 The Fort Bend County Sheriff's Office is seeking information concerning an Aggravated Assault with a Deadly Weapon that occurred in Katy last month.

One male victim told deputies he was shot as a result of a road rage incident. He was taken to the hospital with a gunshot wound.

The suspect is described as a black male between 5'10" to 6'2" with a medium build and a short patchy beard. He has short hair and is between 25-35 years old.

Surveillance footage revealed the suspect's vehicle to be a tan/gold, 2006-2011, Toyota Corolla. The vehicle appears to have hub caps and a dent on the right rear bumper.

Anyone who has information on this crime is asked to call Fort Bend County Crime Stoppers, Inc.

- Visit www.facebook.com/for tbendcountycrimestop pers/ for details on an easy way to submit tips via the P3 Global Intel App.