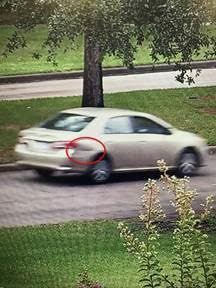 The Fort Bend County Sheriff's Office is seeking information concerning an Aggravated Assault with a Deadly Weapon case that occurred in Katy.

One male victim told deputies he was shot as a result of a road rage incident. He was taken to the hospital with a gunshot wound.

The suspect is described as a black male between 5'10" to 6'2" with a medium build and a short patchy beard. He has short hair and is between 25-35 years old.

Surveillance footage revealed the suspect's vehicle to be a tan/gold, 2006-2011, Toyota Corolla. The vehicle appears to have hub caps and a dent on the right rear bumper.

Anyone who has information on this crime is asked to call Fort Bend County Crime Stoppers, Inc.

- Visit www.facebook.com/for tbendcountycrimestop pers/ for details on a New easy way to submit tips via the P3 Global Intel App.

~ 8 mos ago   Oct 21 2019, 2:28pm
We should all be hyper-vigilant on the roads. Not only to report sightings of this vehicle, though also to be extra careful as not to be involved with them some way!
Reply
This discussion has been locked.
« Back to Main Page
Views: 584